Quickly, Octopoe returns to this concept that we (Americans as generally manifested on the global geopolitical stage) often miss those vicissitudes of history which could otherwise inform our current set of predicaments. It is my sense that our public discourse has increasingly sensationalized an adversarial duality between China and the West, some of which twinges on talk of a seemingly impending military clash. In drawing some connections between this contemporary dilemma and a time from the past, we do not have to jump back to antiquity as before to dig up a historical precedent long since missed about our devastating involvement in Afghanistan. We need only skip back about a century or so to the late 19th and early 20th centuries, cheery years filled with fierce nationalistic rivalry for political and economic domination of the globe, intensified by the imperialistic expansion of the industrialized powers – the United States, Europe in many of its national manifestations, the Empire of Japan. Images of industrial war modeled on this period have been featured on Octopoe in the past.  In the one hundred years leading up to the end of the Second World War, nearly every corner of the world had been touched by the global economic order (via imperialism or imbalanced foreign relations) and affected by the industrial-scale wars which left swathes of Europe and Asia destroyed. While the history is admittedly complex and nuanced, one can draw simple tropes from the record, such as the reluctance of those powers in relative control of the global geo-political scene to make room for the rising players while nationalistic rhetoric fuels competition and ultimately conflict. Some writers whom I have read on the subject speak to a relative unlikelihood of conflict with the trade connections between the two and the general troublesomeness it would create for a region which will only thrive with continued stability. A country which can barely keep the top on its on kettle at times, and flinches at the mere hint of a whistle (thinking about the Western media’s recent reporting of increased crackdowns within China against artists and dissidents, such as Ai Weiwei) may desperately avoid a destabilizing war. Being an internationalist pacifist and a language educator who has nothing to gain from conflict between my people and my number one client, I hope this recent bout of nationalistic propaganda does not drum us into the horror of the trenches and camps, the aerial bombardment and atom bombs.

On Octopoe, we have explored some consumerist sides of the steampunk genre so far, via wedding cakes and then laptops. While we will revisit the idea of looking at consumer goods refashioned in a steampunk image, for now we move on to a meatier subject: how steampunk can be used in our visual media (in this instance film) to produce complex and interesting results. Hayao Miyazaki’s 2004 film Howl’s Moving Castle* serves as an excellent example of imagery that could quintessentially be called steampunk expressing itself in an effectively visual medium (the anime film) while drawing some interesting correlations with the historical record. The world created in the film draws many visual cues from late Industrial Age Europe, the half century or so that lead to the First World War. The humanoid characters are represented as white, and their fashion speaks to this time period as well. An unexplained war is taking place during the story, and there are scenes imbued with nationalistic representations. Generic flags are waving proudly; troops are marching off to their honored doom. Nationalism was a strong cultural trend in these years before the early 20th century world conflicts, and inevitably helped cause them. Any sort of moving machine in the film is almost exclusively run on some sort of burned substance, producing smoke or steam. Miyazaki treads familiar themes in this film nonetheless, and the more traditional futurism of the steampunk genre is replaced by a fantastical magical element that imbues characters and objects with power. In not relying on technology, he still covers the recognizable themes of human interaction with their environment, the roles of nature and technology in that interplay between the two—distinctly through some vivid and bleak images of a war made sinister in that we never quite learn the cause or history behind it in the story.

However, no comprehensive summary will be provided here, nor will we be replete with images—it is assumed that you have seen Miyazaki’s film and remember the imagery and story (wholly or partially) or will rectify the omission in your film viewing lexicon soon, made amply easy by today’s modern technological luxuries.

There is the wizard Howl’s mobile château itself, which builds on Miyazaki’s traditional theme of nature and technology, giving us a semi-anthropomorphic-crossed-with-beetle looking castle. Powered by the fire demon Calcifer, from the outside views it seems to be belching steam or smoke of some sort from the very first frames. Clearly mechanical, but given an instant magical quality.

Miyazaki uses many fantastical and magical references in his films, but Howl’s Moving Castle is imbued with a more pedestrian stream of steampunk beyond the castle. The main character Sophie, and indeed their world, are depicted as being in an unnamed European-modeled country, as mentioned above, clearly at a stage of industrial development comparable to where Europe (industrial development came in stages at different times in different regions of the world… but generally) was at the time of the late 19th and early 20th centuries. The cityscapes are filled with belching factories and crowded with European architecture. Steam trains and trolleys crisscross the landscape of the film’s visuals. There are even individual steam powered cars, piloted by lone drivers or carrying a pair. Lecherous off-duty gendarmes prey on Sophie at one point, instigating her meeting with Howl, the wizard of the title. Other than this, these soldiers wear bright, continental style military uniforms and spend the rest of their screen time cavorting in plaza-side cafés or marching as riflemen in propagandistic martial parades alongside horsed soldiers and tanks. The images of war become more gruesome, and we get more images in a blend of futuristic, magical, and early 20th century military technology inspiration.

Flight is a common theme Miyazaki plays with, and all sort of interesting creatures or things are taking to the air in his films. Howl’s Moving Castle is no exception, and we are shown some reminiscent scenes. Large airships sound a stark drone over the urban areas, dropping bombs in their wake. They are enormous, often taking the form of an aquatic bird, sometimes with fluttering insect wings. We get an ominous view of one behemoth replete with bombs, appearing almost like the eggs of some great flying mother beast who would relish nothing more than cracking their fiery innards across the industrialized landscape. Also in a more visually jarring image, some of the airships squirt out malevolent flying wizard creatures in this unsuitably organic fashion in order to attack Howl (who is flying around destroying marauding airships as a great bird-beast). We have many images of bombs being dropped, and Miyazaki does not shy from the imagery redolent of our own history.

The war of Miyazaki’s film also takes to the sea, and includes a few appearances of great, tub-shaped battleships, proudly sailing out through resplendent harbors full of sailing boats. The military vessels are bellowing smoke, covered in deadly cannons. Later one of these ships returns to the harbor of Sophie’s city, badly damaged in combat, with sailors jumping ship into the water to save their souls. And with all of these images, all that horror of war, we can sort of reflect on these steampunk inspired images: the industrialized and Europeanized backdrop, the technological devices and storyline infused with bizarre, futuristic and magical images. One can begin to appreciate Miyazaki’s interesting role as a Japanese filmmaker and the potential commentary he is making through his choices of historical and cultural representations around the rise of industrialism and nationalism, which lead to the terrible conflicts in the first half of the twentieth century, not least of all for his native Japan. As a decentralized feudal oligarchy for centuries, Japan began a rapid western-inspired modernization in 1868 with what is known as the Meiji Restoration, an event which put power in the hands of a centralized state represented by an emperor, with power resting in the hands of a new ruling elite committed to the transformation of Japan. The country rapidly became industrialized in the western sense during the following decades, and due to the geopolitical implications of such development ran into conflict with another developing industrial power, Russia. The two states squabbled over imperial rights in northeastern China, fighting over economic access to Manchuria and general capitalistic and expansionary rights in Asia in what history calls the Russo-Japanese War of 1904-05. Japan had figured out how to play the same games as the European powers, and soundly defeated Russia and became involved in later European-based conflicts, notably expanding imperialistically at the expense of other nations in the Asia-Pacific region. Japan’s success caught up with her, ultimately being decimated at the hands of other industrialized powers in the competition for global hegemony that was the Second World War. 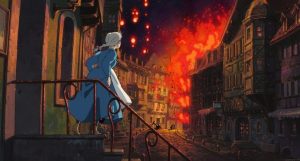 Miyazaki is no stranger to visiting the subject of war in his films, and it is interesting to consider his representations in Howl’s Moving Castle in relation to war as they mirror the historical context of the steampunk genre. While scientific advancement helped inspire the genre itself, new developments in economic systems and their technologies helped contribute to even more violent conflicts between people. We can come back to the similar questions, such as wondering about the merits of this militaristic competition based on economic systems and political beliefs that are unsound and unjust. Miyazaki, as usual, gives us a rich visual and thematic film that broaches these complex subjects.

*This article deliberately does not discuss Diana Wynne Jones’ novel Howl’s Moving Castle, from which Miyazaki adapted his film. His liberties with the story separate these two representations adequately, allowing us to address the film here and not Jones’ novel, a luxury discussed in this post from December 3rd.