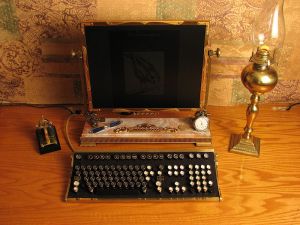 Steampunk electronic consumer goods are almost inevitable. One of the most charming things about the narrative is when we get an image of the protagonist using some gizmo or gadget to vanquish the enemies or solve a mysterious puzzle. An idea to be brought up around these parts in general will be the transcendence of the genre as it allows for different themes, time periods, and conceptions of futuristic technologies than just the classical Victorian imagery of the genre. Many narratives and visual art presentations have amusingly blended the antiquarian and the futuristic. As we look at these particular consumer electronic goods, we can see a sort of small step away from the Victorian. It’s no mere cake decorated in a theme: now one is actually taking the technology, in this case a rather advanced piece (the laptop) and forcing it’s visual representation to an anachronistic place, but assuredly using it in the modern way. How retro-futuristic of one. It seems like not too many true steampunk laptops exist out there, but check out some of these crazy things (are they actually pleasant to use, or is the highly designed concept not good for its general interface?):